Touchdown! NASA’s Perseverance Rover is Live on the Surface of Mars 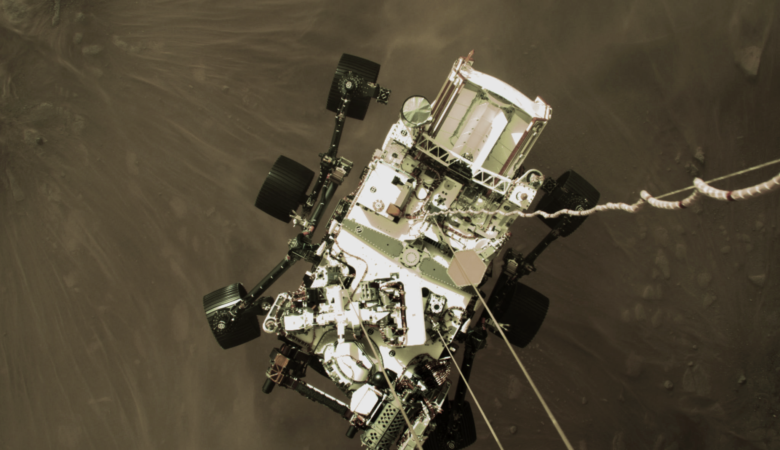 If you’ve been following the news lately, you’ve probably seen that NASA’s newest Mars rover—the Perseverance—has touched down on Mars and is now beaming back photos from the red planet. On February 18th, Perseverance landed and immediately started sending images to scientists on earth.

Perseverance was launched to look for signs of life on Mars. Over the next two years, the rover will roam a specific area of the planet to see if there are any indications that life—even microbial life—has existed on the desert-like planet. It will also perform other research tasks that could aid scientists in future missions to Mars.

Whether you’re fascinated by space or would prefer to save this planet first, there’s no doubt that landing on Mars is an unbelievable scientific accomplishment. Read on to learn more about Perseverance’s mission and what NASA hopes to gain from it.

In short, the Perseverance is about the size and weight of a car—so maybe Back to the Future II was just a few years (and planets) off with its flying car prediction.

The rover’s power source is a Multi-Mission Radioisotope Thermoelectric Generator (MMRTG), which converts heat from the radioactive decay of plutonium into electricity. This gives it a steady flow of about 110 watts, but it also has two rechargeable lithium ion batteries that can help when there are additional power demands.

It’s also fitted with “23 cameras, microphones, and…a helicopter drone…to support its endeavors for the next 687 Earth days – or one Mars year – on the Red Planet.” And it comes with its own “family portrait” like people put on the backs of their cars.

From earth to Mars: Perseverance’s journey

Perseverance was launched on July 30, 2020 from Cape Canaveral, Florida. It took seven months for the rover to travel 292,044,460 miles and land on Mars. During its journey, it was enclosed in a protective shell that saved it from heat damage and propelled it through space.

Perseverance took seven minutes to finally touch down on Mars’ surface in the Jezero crater. Once it landed, it took about five minutes to start beaming back photos from Mars. There is an 11-minute time delay between Mars and Earth, which is about as close as it gets to real-time communication.

Perseverance will spend about two years on Mars’ surface, working through various research tasks—including sending us photos of the red planet.

What will Perseverance do on Mars?

The main goal of the Perseverance mission is to find out if there are any signs of life on Mars, past or present. This is the first rover to do so since the Viking missions in the 1970s. The rover will collect soil samples from various parts of the planet, put them in tubes and leave them there to be picked up at some point in the future.

Perseverance is also studying Mars’ geology, and will try to figure out ways to produce oxygen from the predominately carbon dioxide-filled atmosphere. If successful, this could be used for humans to breathe, or at least to propel rockets.

Do scientists really think there was life on Mars?

The crater where Perseverance landed was thought to once hold an ancient lake—ancient to the tune of 3.5 billion years ago. Scientists believe that if they’re correct and it was a lake, there may be organic carbon buried beneath the surface. If there’s water, there’s also a very good chance that there were at least microorganisms present, too.

If the rover can dig up proof that there was ever life on Mars, this could be a huge development for space exploration. How did the planet evolve, and what happened that makes it no longer hospitable? As you might imagine, the answers to these questions could offer plenty of insight into our own climate change battle. (Or, if you’re one of earth’s billionaires, you could start making a backup plan to colonize Mars.)

Whatever happens with the Perseverance rover, one thing is for certain: it’s a triumph of science and humanity. It was less than a century ago that man first walked on the moon—how long will it be until humans can walk on Mars?