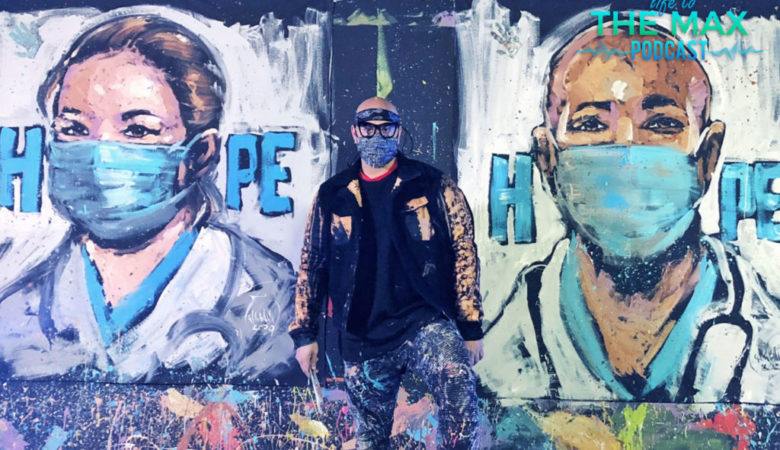 David tells Life to the Max about his youth, inspiration, goals, charity work and so much more..including his romance to a certain guest co-host….in this amazing interview you won’t want to miss!

David Garibaldi Quick Bio
Artists transform an empty canvas into a work of art through their skill, experience, inspiration and senses. David Garibaldi’s life and transition into a world-renowned performance painter is no different. The culture and color of graffiti art served as an early inspiration for Garibaldi. Born in Los Angles, he later moved as a youth to South Sacramento. It was here that he learned to enjoy the use of his hands and body through art on “larger and somewhat illegal canvases” by painting graffiti as an angst teen. Graffiti artist and high school dropout, he was living day-by-day. The only constants in his life were music and art.

The performances he unwittingly practiced as a graffiti rebel in his garage are now on a public stage. As a performance painter, Garibaldi creates images through his body movement and brushes while communicating via music to an amazed audience. “I create images in an entraining way and my hope is to inspire the audience to use their passion to benefit and inspire others,” said Garibaldi. “That is music and color. That is rhythm and hue.”

For this young artist, musical inspirations include U2, Kanye West, Jay Z, Stevie Wonder, Marvin Gay, The Beatles, Lady Gaga and Glitch Mob. Featured shows also include the beats of Garibaldi’s exclusive DJ, Joseph One. The energy of these performances is both mesmerizing and engaging and there is nothing like it in the world. Hundreds of thousands have witnessed Garibaldi paint live by transforming a blank black canvas into pop art icons through his “Rhythm and Hue” shows. Garibaldi has performed for Fortune 500 companies including AT&T, Intel and Disney. He has also been featured at charity events for Playboy, NBA, and celebrities Snoop Dog, Santana, Tommy Lee, Dave Navarro and Blue Man Group.

Inspiration serves Garibaldi in his art and his life. “Living with passion and purpose” drives Garibaldi every day to transcend what he does as an artist into a philanthropist. A high school animation teacher first inspired him to take his passion for graffiti and turn it into a more positive and creative direction. Garibaldi never forgets this encouragement and more importantly the value of someone believing in him. Every performance is an opportunity to give back—either through teaching youth or providing resources to the community.