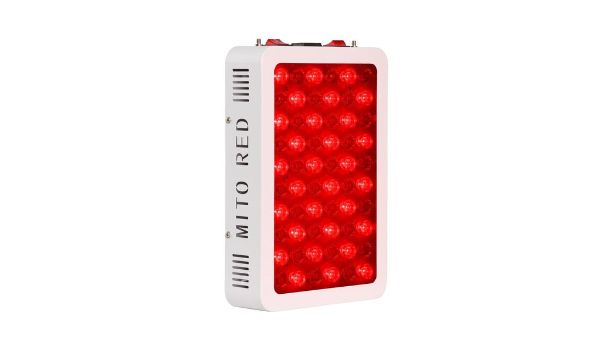 Superman got his power from the Sun, we get ours from MitoRed
Scientifically Driven
Available only from Mito Red, the patent-pending MitoPRO series incorporates the four most bio-active wavelengths 630nm / 660nm (Red) and 830nm / 850nm (Near Infrared). This unique configuration drives enhanced efficacy by delivering increased light energy at the parts of the spectra which maximize cytochrome c oxidase activation.

While 660nm and 850nm LED light are very well studied and proven, the MitoPRO series “pumps up the bass” by adding 630nm and 830nm which research shows will further enhance Cytochrome C Oxidase activation. This can be seen graphically below and is outlined in the seminal paper by Karu, et al [10] outlining the action spectra for both red and near infrared light.

Karu explains: “an action spectrum is a plot of the relative effectiveness of different wavelengths of light in causing a particular biological response, and under ideal conditions, it should mimic the absorption spectrum of the molecule that is absorbing the light, and whose photochemical alteration causes the effect”.
The MitoPRO series with both 630nm and 660nm LEDs is able to more optimally cover BOTH of the peak points in the red spectrum.

In addition the 630nm wavelength has been shown in many research studies to be beneficial for the following:

Hair / Scalp Health & Hair Regrowth Researchers have found 630nm to be helpful with both frontal fibrosing alopecia and Lichen planopilaris. Lichen planopilaris (LPP) affects the scalp and hair. It is a form of lichen planus, an inflammatory condition affecting the skin and mucous membranes.

Another study [5] concluded that after 630nm LED Therapy (LEDT), “muscle soreness, muscle strength loss, and ROM (range of motion) impairments were significantly reduced up to 96 h after a damaging eccentric exercise bout for the LEDT group compared with the PLACEBO group”.

The authors elaborated that just a SINGLE LEDT (630 nm) intervention immediately after a damaging eccentric exercise bout was effective in terms of attenuating the muscle soreness and muscle strength loss and ROM impairments.

All three studies referenced above were ‘gold standard’ randomized control trials and should be exciting reading for anybody looking to perform better athletically and / or recover faster from exercise!

Skin Health One study [8] examined photorejuvenation of the face with a combination of microneedling, 630nm red light and aminolevulenic acid (ALA). The researchers found statistically significant improvement in the global photoaging scores, as well as sub‐components of the scale (fine lines, mottled pigmentation, sallowness, tactile roughness, and telangiectasias) at 3 months as compared with baseline live assessment, and at 6‐month live assessment compared with the 3 months.

Another study [9] examined the effects of 630nm LED therapy on sensitive skin syndrome. Sensitive skin (SS) syndrome is defined by the occurrence of unpleasant sensations in response to stimuli that should normally not induce such sensations. It affects ~50% of women and 40% of men and can impact the quality of life.

The treatment consisted of red LED light exposure twice a week until significant reduction in SS-10 with a maximal treatment length of 8 weeks. The primary outcome was defined by a 60% decrease in the SS-10 score compared to the baseline.

Bone and Joint Health Multiple human studies have found 830nm light therapy to be beneficial for bone and joint health. One study [17] examined 830nm LLLT in the healing from mandibular distraction osteogenesis surgery and found faster healing and improved mineralization. Another study [18] examined the impact of 830nm LLLT on closed bone fracture (CBF) of the wrist and hand. The study concluded that 830nm “LLLT can relieve pain and improve the healing process of CBFs in the human wrist and hand”.

A plethora of ‘gold standard’ human randomized controlled trials [18,19,20] have demonstrated 830nm NIR light to benefit osteoarthritis. Osteoarthritis is a common form of arthritis, typically with onset during middle or old age, that is characterized by progressive degenerative changes in the cartilage of one or more joints.

Now you can enjoy all the benefits of Red light therapy from the comfort of your own home. Use the link and code for your special Complete Human Discount.